Concert Lovers in Jamaica and dedicated supporters of annual Jamaica Jazz & Blues Festival are still saddened by the announcement that the show will be postponed in 2016. Since the show’s inception in 1997 , it has become a staple on the calendars of Jamaicans and thousands of music lovers abroad. Jamaica Jazz &Blues has attracted not only the “who is who” in the Reggae Industry but also the creme de la creme of R & B and Jazz music internationally. The show has boasted international recording artistes and headliners such as Diana Ross, Mary J Blighe, Lionel Richie, Celine Dion, Air Supply, Mariah Carey just to name a few. The organizers expressed their disappointment for not bring the 19th staging to fruition but promise to be back with a bigger and better show in January 2017 , their 20th year. Until such time , the show must go on and I have put together a list of other events that will quench your musical thirst in 2016.

This will be the first major concert of the year and although the line up has not been released yet , expect a well organized music event of world class standards. Shaggy has a lot of friends and they always show up for him at his annual concert especially since it is in the name of charity. The now biennial event will be held on January 2, 2016 on the lawns of Jamaica House in Kingston. If  the 2014 staging of the event is anything to go by then you don’t want to miss this event. Check  my post on the last concert. For Ticket information check out the Shaggy Foundation website and facebook page.

This annual event started out as a birthday celebration for Reggae Artiste, Tony Rebel in his home parish of Manchester. The event continuously grew from a one night concert into a 2 day festival , that is now dubbed as the mecca of “conscious” entertainment.   Rebel Salute outgrew a number of venues on the South Coast of Jamaica and eventually settled in it’s current venue in Priory St. Ann. The strategic venue change to Jamaica’s North Coast has attracted thousands of international visitors and supporters of Reggae music annually. In keeping with the principles and lifestyle of the founder/promoter  Tony Rebel , the event has a strict No Alcohol or Meat policy (except for fish). The aim is to provide family type entertainment that promotes Jamaica’s music, culture, arts and cuisine.

Reggae Giants such as Jimmy Cliff, Damian Marley, Joseph Hill (Culture), Buju Banton,  Garnett Silk have graced Rebel Salute’s Stage over the years and  in 2016 one can expect an impressive line up as per usual. For Ticket and other information on the event check out their website or facebook page. 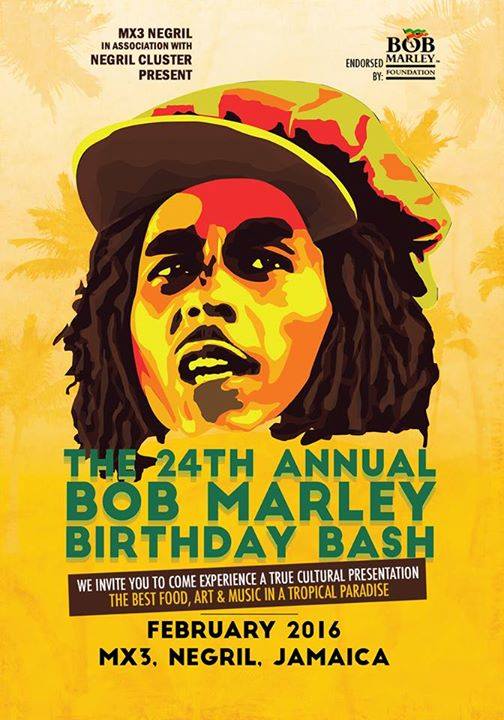 February is Reggae month in Jamaica and it is also the birth month of Reggae icon, Bob Marley . Bob’s birthday is February 6 so on the days leading up to that there are a number of celebrations in his honour. The Bob Marley Foundation  usually organizes a number of events , including celebrations at The Bob Marley Museum . Last year the foundation collaborated with Digicel to organize a concert to mark Marley’s 70th Birthday. ATL Motors  also refurbished and unveiled Bob’s Land Rover at the concert. See the epic “rastaration”here.

February 1 is also Dennis Brown’s Birthday . The celebrations are usually not on the scale of  Marley’s but it is still worth it to pay homage to “The Crown Prince of Reggae”.

Details of 2016 Reggae Month celebrations have not been revealed as yet but  Jamaica Reggae Industry Association (JARIA) normally releases a calendar of events by January. These usually includes free weekly concerts at the Emancipation Park in Kingston. Stay tuned to my blog or follow me facebook or twitter for Reggae Month events and updates.

The Easter season in Jamaica is all about carnival/bacchanal.  Bacchanal Jamaica launches January 8, 2016 with a New Year’s Party. Then Feb 12 will see their first Friday Night soca party at the party headquarters, Mas Camp. In between that will be weekly socarobics sessions , each Monday and Wednesday. Socarobics is a great way to get in shape, learn the songs and dances of the seasons and possible decide on what group to march with. Check Part 1 , 2 and 3 of my guest posts on Absolute Travel Addict  of my bacchanal 2013 highlights. The season culminates with Beach J’ouvert on March 26 in Ocho Rios and the Road March on April 3.  Save this calendar of events.

Another staple for the season is Pandemonium , a collaborative effort of Machel Mantano and Shaggy.

Though the date has not been announced yet keep checking their facebook for the soca and paint madness.

Reggae Sumfest is THE summer concert experience in Jamaica. The week starts off with a beach party and various events around Montego Bay then a weekend full of high class Reggae Acts with a few international headliners in the mix. Expect solid Reggae performance from all the giants in the industry. Sumfest prizes itself as the greatest Reggae Show on Earth and 2016 should be no different . Check their website and Facebook page for ticket information and the announcements of the 2016 lineup.

Make sure to mark your calendars and plan your travels to catch one of these great events. Feel free to leave me a comment or email me at info@www.drylandtourist.com if you have any questions.